In this series of interviews, we talk to two VITAL consortium members at different stages in their career about their backgrounds, collaboration and how research has changed over time.

Our first interviewees are Baudouin Standaert (retired) and Jurjen van der Schans (postdoc researcher). They share a common interest in health economics and are working together on Work Package 3 (WP3). 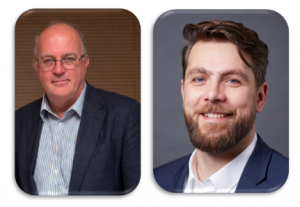 Baudouin received his medical degree with a specialty in epidemiology and health economics. He has worked in various countries and institutions in the field of public health including the University of Antwerp, UCL Brussel and the World Health Organization (WHO) in Geneva. In 1988 Baudouin started working as director of the Provincial Institute of Hygiene in Antwerp, which happens to have been founded by his wife’s grandfather.

After several years, he wanted to move more into health economics, and while this was not possible at the institute, various pharmaceutical companies wanted health economics expertise in-house. This led him to AMGEN, one of the world’s leading biotechnology companies, where Baudouin was responsible for health economics in Europe. After ten years, a reorganisation saw Baudouin and his team relocate to Switzerland, which would see him shift to GlaxoSmithKline (GSK) to be head of the vaccine program for health economics, a role he held for 15 years until his retirement.

With a laugh, Jurjen says “My career is a little bit shorter. I have some years to go.” Jurjen works at the Global Health Unit at University Medical Center Groningen (UMCG) and at the Faculty of Economics and Business. His background is in pharmacy and he has always been interested in the intersection of policy, business and science. His PhD was in pharmaco epidemiology, pharmaco economics and pharmaco therapy with a main focus on epidemiology and psychotropic medication, that is, medications for ADHD, depression and psychotics and the effect it has had on children and the elderly. After completing his PhD, Jurjen worked for two years as a lecturer in health technology assessment at the University of Twente and was a guest researcher in New Zealand. Settled in Groningen, Jurjen divides his time working on VITAL and other global health projects at the UMCG where he is involved in the evaluation of (cost-)effectiveness in the Horizon 2020 project on scaling-up non-communicable diseases interventions in South-East Asia (SUNI-SEA).

The IMI-funded VITAL project was something Baudouin wanted to continue working after his retirement. “I wanted to work on a project to maintain my knowledge and development. At GSK, they focused more on vaccination and the ageing population. In order to make it more consistent, I thought it would be good to develop a European program on this topic.” That program was developed in 2018 and approved by EFPIA in 2019, with Baudouin the industry representative until his retirement in September 2020. He still represents GSK in WP3 and continues to assist as the project develops further.

Jurjen initially contributed to the content of deliverables. He says that “I am currently acting more as a manager of all the different deliverables and people involved in the project. It’s a work in progress, and as such your role changes according to what is necessary. At universities we do not have people for every task there is. Therefore it is important to be creative and flexible to keep everything moving forward to achieve our ambitious plans!”

Baudouin and Jurjen have been working together on WP3 of the VITAL project for around three years. “I knew of Baudouin, and when I was a student we met briefly at a conference. He has very creative and innovative ideas. When I am struggling or in doubt about a specific project and google, Baudouin’s name often pops up in articles with many out of the box ideas. That’s what I really like about him.”

Baudouin works closely with UMCG. “I was pleased to discover that this group wanted to further develop the VITAL program. I did not know that much about Jurjen’s background, so it was very interesting to hear this today. Jurjen is punctual. If I have a question, he always answers promptly. He is always problem solving and has a positive attitude which is important in projects like this. Furthermore Jurjen is very diplomatic when it comes to managing his people.” Baudouin points out that there has been an evolution in academia that means they can manage different people from various backgrounds, as Jurjen does in VITAL.

“The new generation is more open to new ideas. It’s also very important to make the shift, that we already see, from micro to macro management. As a leader, you should give your team the incentive to develop so they can evaluate and start thinking for themselves about what they have to do.”

The Future of Research

According to Jurjen, it is: “To take the next step in knowledge development and prevention on a broader scale. You need more societal partners and we need to create more common trust between different stakeholders such as pharma, academia and industry. We need different methodologies to manage projects such as this so that all parties involved can do their own thing. It’s important that we move to a common objective.”

“The funny thing about health is that we are aiming for the same thing, but not all parties are moving at the same pace. In the end we all want to make people better and healthier.”

“Projects like these are very important but we need to acknowledge the complexity of these projects and how we all work together in these complex consortia.”

Baudouin agrees: “VITAL is unique in this regard as different groups are already working together. For many projects there is no economic component and the focus is from one particular angle. We need different perspectives to work together. That’s what we need more of!”

Vaccines and Vaccination against SARS-CoV-2: Considerations for the Older P...