In this series of interviews, we talk to two VITAL consortium members at different stages in their career about their backgrounds, collaboration and how research has changed over time. We sat down with Ward Schrooten (P95) and Mathieu Bangert (Sanofi). They are working together on Work Package 3 (WP3). 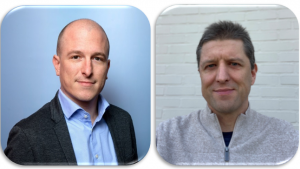 Ward studied Medicine followed by Biostatistics and Data science with a focus on Health Data. Since then he has been working all over the globe, mainly in consultancy. Ward has been working in the Caribbean for around ten years, for research institutions and for hospitals on hospital administrative data. “I was working in Trinidad and Tobago, Belize, Surinam and French Guyana amongst several other countries for different organizations such as CARPHA (Caribbean Public Health Company), PAHO (Pan American Health Organization) and CDC (Centers for Disease Control) and the government. I worked on hospital discharge data but I was also sent to prisons to look at tuberculosis prevention for example.” At the moment Ward is dedicating 60% of his time to P95, and the remaining 40% on quality and patient safety research at the University of Hasselt in Belgium.

“No Caribbean for me”, Mathieu laughs when he’s asked about his background. Although he did some travelling himself. “I’m trained as an immunologist, I did my PhD in immunology at the Liverpool School of Tropical Medicine in the UK. After that I was trained as a field epidemiologist with the ECDC (European Center of Disease Prevention and Control) in the EPIET/EUPHEM fellowship program. I was based in Spain for two years and worked on local infectious disease outbreaks, but also went to West Africa in support of the Ebola outbreak response. ”

After his fieldwork, Mathieu joined the WHO (World Health Organization) in Geneva in the Department of Neglected Tropical Diseases, where he worked as an epidemiologist supporting policy, guidelines and surveillance activities for neglected tropical diseases. In the summer of 2019 Mathieu joined Sanofi Pasteur as an epidemiology lead developing scientific collaborations with field experts for surveillance, data science modeling and health economics activities.

Ward and Mathieu’s main role in VITAL is to coordinate work package one (WP1) in order to ensure that all partners achieve their goals, are able to openly discuss scientific challenges, ensure that everyone’s voice is heard and facilitate discussions with other VITAL work packages.

“I think Ward alluded to probably the most important point, when he says that he’s working to collaborate with the other work packages. Considering that all work packages are interconnected in VITAL, making sure that we understand and communicate where the challenges lie ensures that the scientific activities from different groups are done in line with VITAL’s objectives. I think that’s really a critical part of our role, I would say.”

And the perks of working in a consortium? Ward and Mathieu enjoy the partnership with different countries, and people from different organizations and backgrounds. More importantly, Mathieu points out that the research work undertaken by VITAL is crucial to help reduce the impact of existing endemic – as well as remerging pandemics on our society’s ageing population. Both agree that the project’s multidisciplinary approach is very interesting and needed. “In VITAL we are using real world evidence, observational studies, traditional clinical trial  like immunological studies as well as health economic evaluations. We bring all these data elements together. VITAL is not only multidisciplinary in terms of the scientific techniques applied, but also in terms of the outcomes reported.”

Ward laughs, “At the beginning of my career, all medical information was mostly paper-based and though we have thankfully moved forward, it is still not as fast as I would have wanted it.

Looking at the future, I think, in terms of data, this will be even more important. Looking at Vital I hope there will be more standardization, because we are now spending a lot of our time adjusting the differences.

Communications too, is an important area that can help drive further development. Mathieu adds, “We’re headed towards routine use of ‘Big data’ in public health, and we’re already seeing it now in our own VITAL work package with for example the FISABIO data set. This rich real-world evidence data set can connect multiple health datasets to one patient and thereby granularly describe patient pathways. Big data has the potential to overcome the challenges of the classical observational and interventional studies that we’ve been doing for decades.”

One of the things that we’re missing – particularly in Europe – is more emphasis on combining the strengths and expertise of academic, public health and private sector professionals in the form private and public partnerships (PPP), such as what we’re doing in VITAL.

“We need to work together to better understand our common needs and try to build frameworks that are perhaps smaller and more agile. By exchanging and acting together as scientific professionals, we will be stronger in tackling current and future infectious disease challenges, and this I think is definitely the way forward.”